Building Diagnostics Group, Inc. (BDG) utilizes an inspection technique that provides irrefutable evidence for water impact investigations. Through the use of high-resolution thermal imaging and advanced laboratory analysis we can identify historical water loss data by identifying the DNA fingerprints of “signature” water impact molds. Our final report will provide overwhelming evidence to substantiate your next water loss claim.

The United States Environmental Protection Agency (US-EPA) developed a standard for indoor mold analysis called ERMI (Environmental Relative Moldiness Index). This standard is based on a test using state-of-the-art DNA testing (MSQPCR) to identify molds that are linked to water intrusion and various respiratory diseases such as Asthma, Chronic Sinusitis, and Infant Wheezing. The results obtained from this test give a dwelling a meaningful ERMI score, which can be compared to the 1,100 homes that were studied by the EPA.

A similar test, known as ARMI (The American Relative Moldiness Index) is a (QPCR) panel of testing for indoor molds that was also developed by the United States Environmental Protection Agency (US-EPA). This panel includes 13 mold species; including species that are known to thrive in water impacted buildings. Because DNA analysis uses dust samples it provides a historical perspective you cannot get from other sampling methods.

Due to the establishment of these new DNA standards, this new testing makes all previous tests used to identify potential mold-related issues obsolete, including traditional microscopic analysis of spore traps, tape lifts, and swabs. Typically, we recommend DNA analysis in most of our investigations.

Insurance claims relative to water intrusion rely on establishing the “cause of loss.” Was damage to the property caused by a storm event in which wind driven rains entered the building envelope? Understanding if damage was caused by water intrusion can be a daunting task if the areas in question have dried and little evidence remains. Our approach with scientific efficacy is extremely helpful in making this determination. DNA analysis of interior surfaces likely to have been impacted by water infiltration can reveal if water indicator fungi (molds) are present. Specific fungi will grow when exterior penetrating moisture enters the wall cavity.

In addition when moisture passes through the wall cavity and impacts baseboard, flooring and exterior sheetrock the same indicator fungi will grow. Samples taken from these areas and tested using these methods may reveal with 99.999% certainty the presence of these unique microbial fingerprints. Such laboratory data in the absence of or in addition to visible water damage provides scientific verification of a water impact event. The combination thermal imaging and DNA analysis provides irrefutable evidence of “cause of loss” claims.

We have used these methods with great success in over 40 litigation projects on the east coast of Florida relating to water damage losses as a result of the 2004/2005 hurricane seasons. Give us a call today to discuss how we can help substantiate your next water loss claim.The infrared image above has an anomaly indicative of historical water damage even thought the area was confirmed dry using a handheld moisture meter. Water can change the thermal characteristics of drywall and impact the effectiveness of insulation in exterior walls & ceilings. High-resolution infrared thermography can detect & document these anomalies associated with historical water damage. 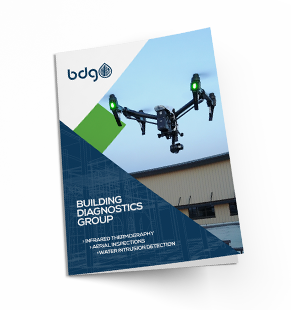